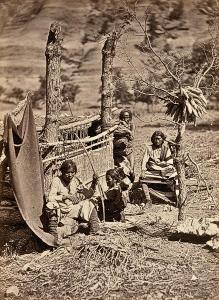 These three images are of Native American Indians, taken at the turn of the 20th century. It is in fact remarkably difficult to find a less posed and more as it were candid image of a native American Indian which in a way illustrates the dominance of Curtis’s work in the field in general.

‘Timothy H. O’Sullivan captured some of the traditional daily life among the Navajo in this 1873 photo taken near Old Fort Defiance in New Mexico of Navajos clustered around a loom, hunting equipment and drying maize.’

These images, all taken from the same source, but different photographers, Illustrate to me the change in photo style between candid and staged. The staged Indians fit the stereotype of warrior like, bold and brave warriors. The last image (To the right) is the work of Timothy H. O’Sullivan who is purported to have produced some of the less romanticised and everyday images that we might consider more in line with documentary as opposed to portraiture photography. The other images are produced by Frank Fiske who essentially follows the romantic tradition after Curtis. Their style is almost identical.  (all images from link below).

My conclusion as far as images of the native Americans goes is that it is not inevitable that the Indigenous Americans were shot in a romantic light, but rather was informed by a cultural outlook, perhaps one that the Americans themselves had of themselves as the great founders and pioneers of a new land.

O’ Sullivan’s image does show a more everyday and banal face to the tribes that lived in the wild spaces of outback America. It is useful that we have something to juxtapose the otherwise standard hero shot.

I'm a student photographer studying through the OCA a UK based arts university. I'm in the foundation year of my studies and enjoying it immensely. I'm also a yoga teacher and co-founder of Bodhiyoga a buddhism based yoga teacher training program that runs in the UK and Spain each year. As a photographer I'm interested in all forms of fine art. I find the arts really important in my life. I love nature and aim to be in the outdoors as much as I can. Generally I think that all the different strands of my life are flowing to towards self development in the greatest sense of the term. The arts, buddhist practice yoga and meditation are all tools to that end. I feel committed to communication the these values in the world both through the visual arts as well as teaching. View more posts

This site uses Akismet to reduce spam. Learn how your comment data is processed.